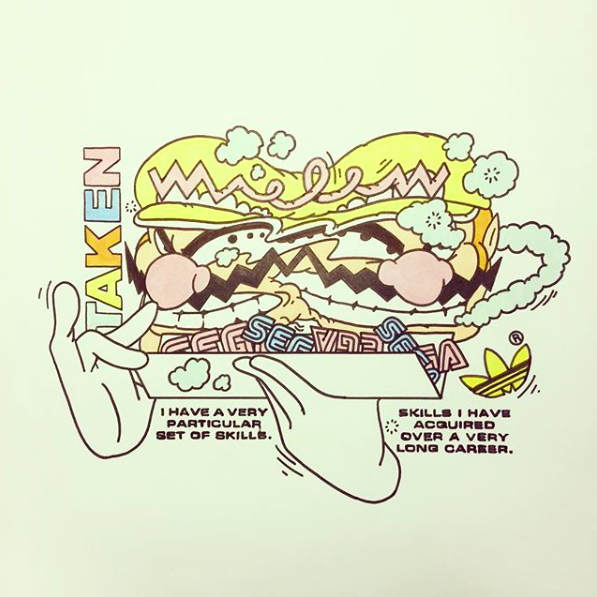 Who needs drugs when you can stare at Ermsy’s drawings?

This time on Visual Satiation, we’ll talk about counterculture Italian comics and music that makes you cry with a terrific, British artist and a lovely human being: Ladies and Gentlemen please welcome Monsieur Ermsy!

Hi and thanks for having me. I’m an artist, and I try to make cool things that I like and that other people might like too. I’m a collector, an art appreciator. I’m interested in popular culture, music, art, film, and life.

How many years ago did you move from the UK to Paris, and how’s life?

I’ve been here for nearly 10 years, it’s a good city, one of the most beautiful I’ve experienced.

How’s the creative scene in Paris, and who are the hottest local artists you would recommend to have a look at?

It’s good, it’s a really creative city and always has been.

One guy that I would recommend is my friend Jan Garet who’s been quietly killing it for years with sprays and illustrations.

I’m a super fan of yours and before I met you in person, I thought you were some sort of crazy artist, therefore I was surprised to find out you’re very calm, polite and a truly interesting person.

One of the things that made me like you, even more, was that you’re also a nerdy comics lover.

What are your all-time favourites, and which are the last good ones you discovered

Very kind thanks. I like a lot of comics from your country as we already discussed at the Juxtapoz show! There are so many.

The work of Magnus, who’s use of black and white is inspirational.

Jacovitti for his craziness and line work.

I love that his work looks like it’s all drawn with a Bic pen when you zoom in – maybe it was. It gives so much feeling in the line work.

Also, I’d have to say Bonvi, who I regard of one of the greats, and isn’t really known outside of Italy.

I have a growing collection of Chinese ones, where they’ve redrawn or created entirely new stories using western franchises such as Star Wars, Thundercats, Transformers etc, that were huge over here at the time.

Besides being an amazing illustrator, you also come from a graffiti background. Can you tell us a bit about that?

I found out about graffiti as a very young kid.

There was an enormous breakdance mural not far from where I lived with a couple of characters dressed in Adidas tracksuits doing an arm wave and ‘Electric Boogaloo’ written in giant letters between them. It was intriguing back then and I wondered who’d put it there and why.

But most of all I loved the impact and the colours, the fact that it was done without permission was also very cool.

There was also a 2 metre high Ghostbusters logo that someone had painted just up the road from there that made such a big impression on me.

A year or two later some older kids showed me a copy of Martha Coopers’ book.

To cut a long story short, this set me off doing graffiti on and off for the next 20+ years. I travelled all over the world painting in lots of different countries with a lot of guys.

What kind of music do you listen to while you’re working?

I like Italian library music, amongst many other genres.

The work of Alessandro Alessandroni, for instance ‘Prisma Sonoro’.

There’s something so great about Italian culture in general. I’m a record nerd and listen to a lot of music that way.

Have you ever cried for a movie? If yes, which one was it?

Haha. I’ve cried to music, some of Carlo Savina’s orchestral themes are just beyond beautiful!

It’s usually music rather than film that catches me off guard!

Lastly, let’s give you just few minutes to draw a caricature of yourself and see how it goes!

Thank you Ermsy for being with us!

We wish you all the best!