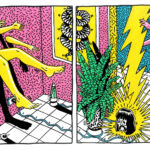 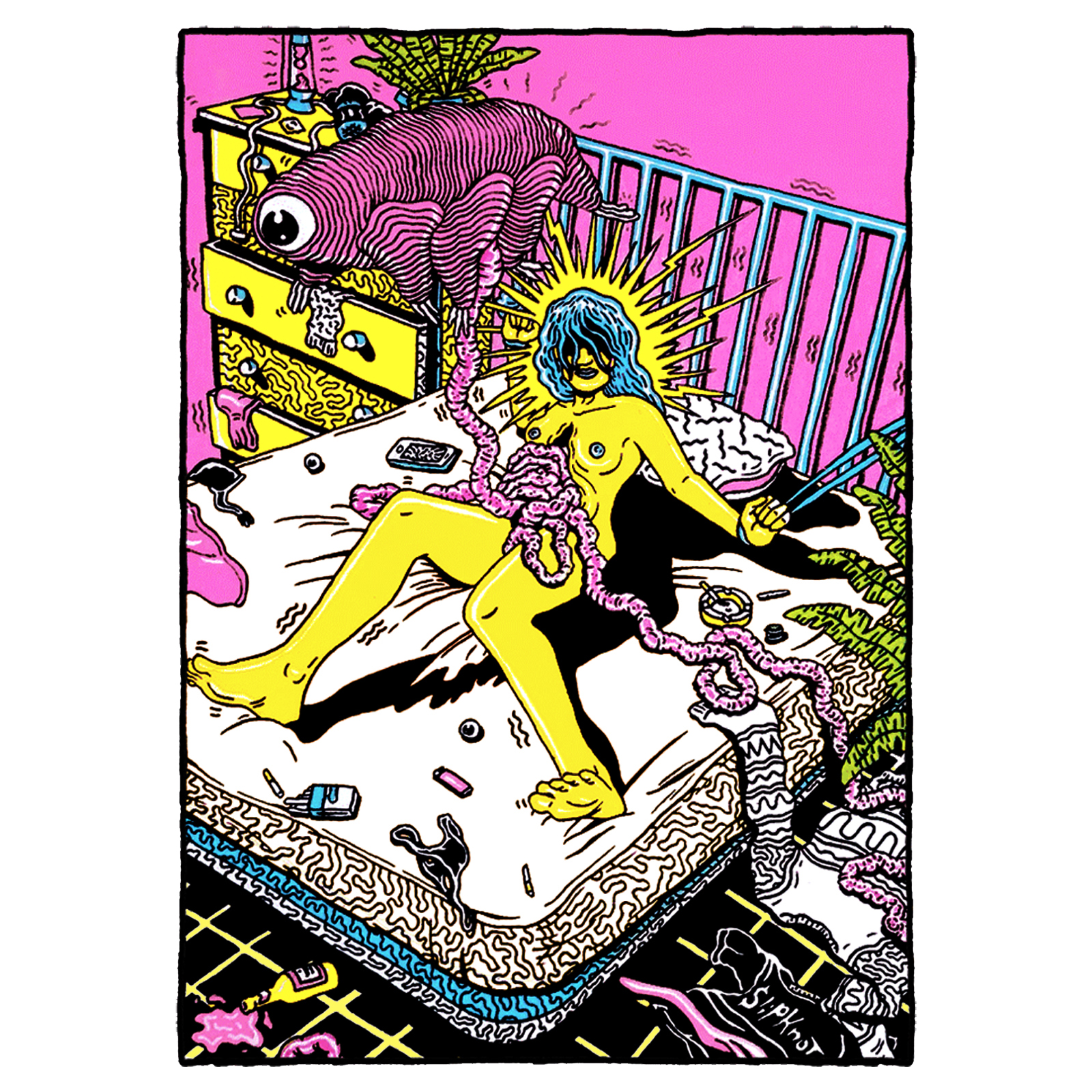 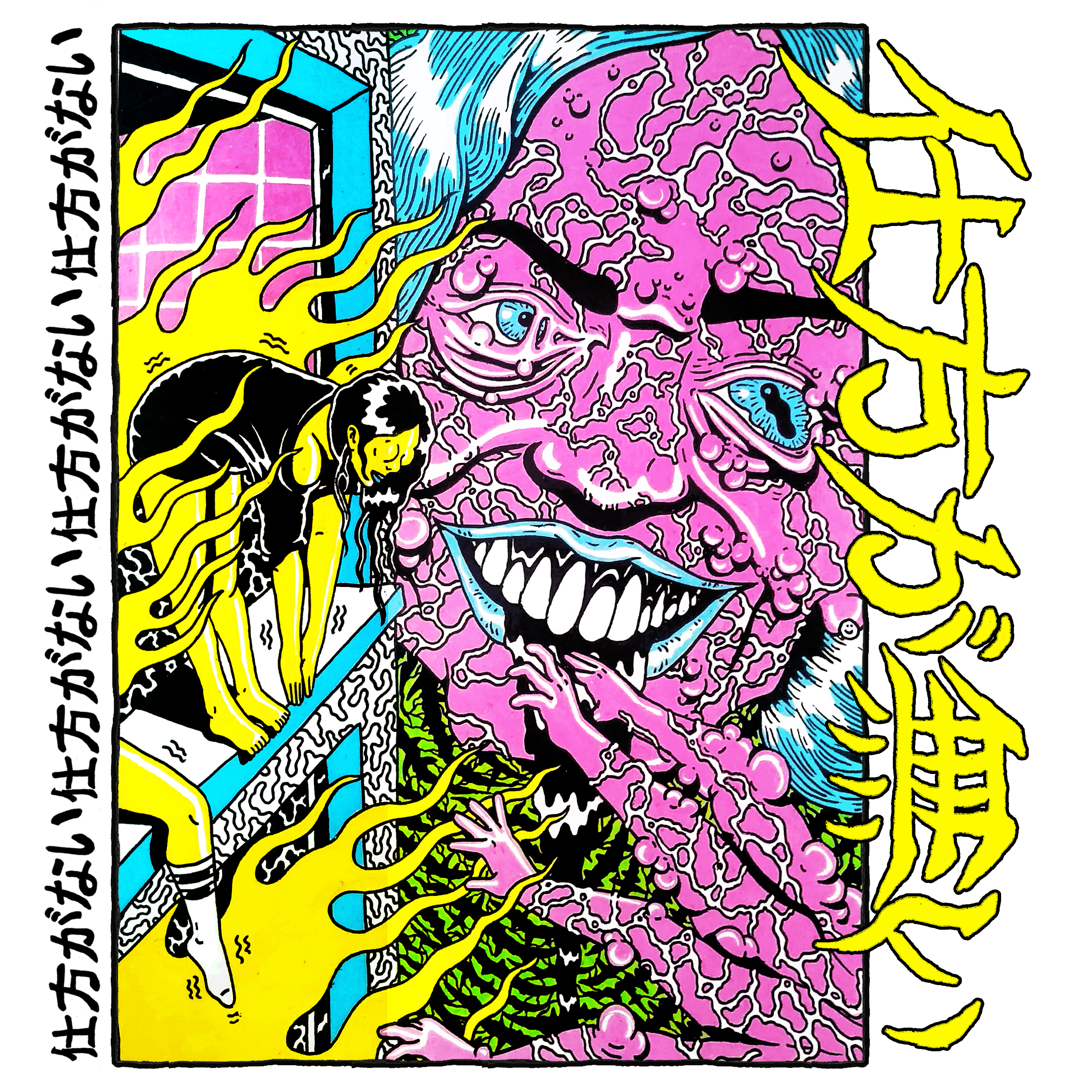 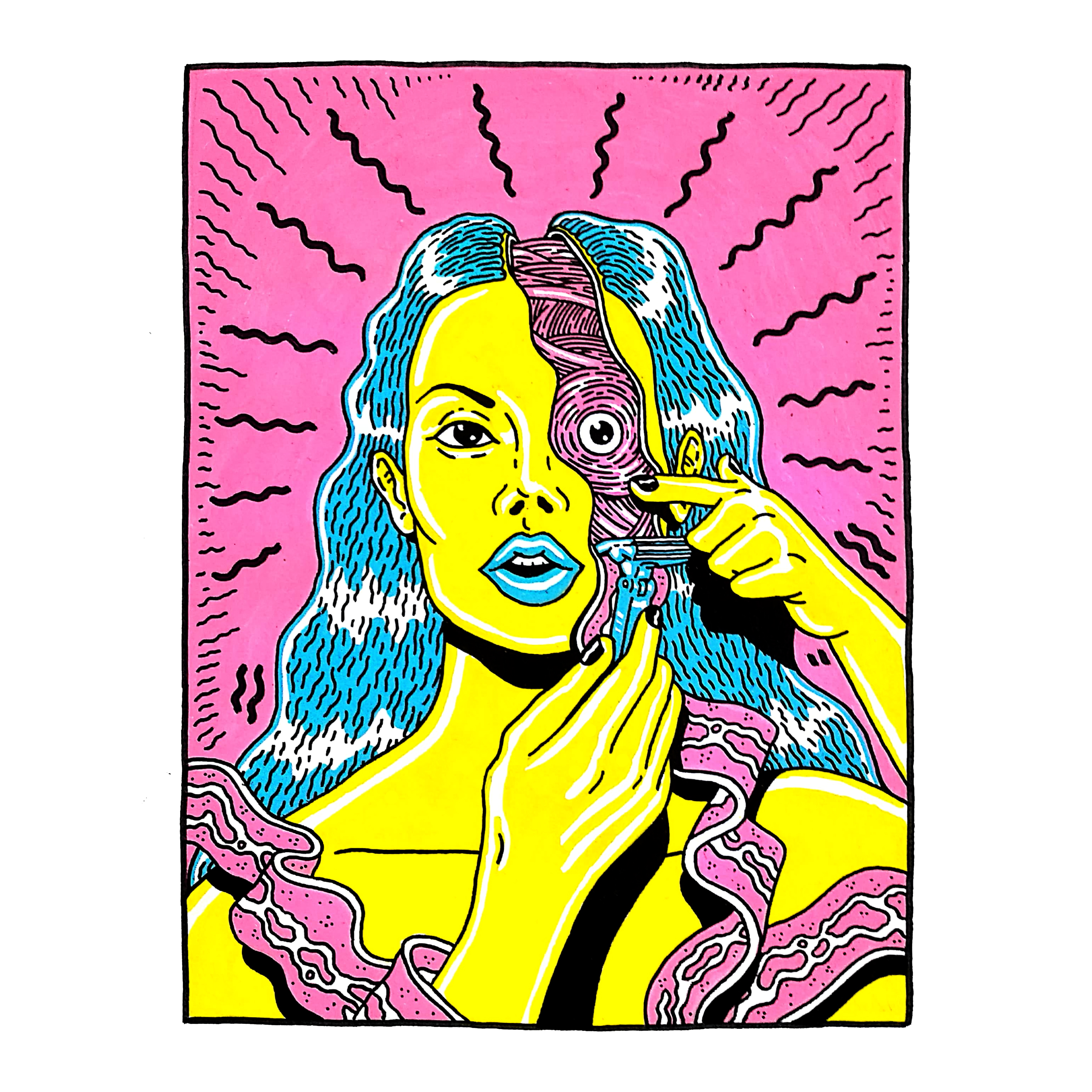 This time on Visual Satiation we’ll have the pleasure of talking with Fiedler, an elusive, underground Brazilian artist and musician, whose dazzling work is an explosion of chaotic visions in acid colors with strong punk, graphic vibes framed in some good ol’, pop comic strips-like illustrations.

It’s not easy to find information about you, so let’s start with the basics: Can you tell us a little bit more about yourself?

I don’t know, I’m just a guy trying to express himself, a somewhat flawed human being, a little reclusive artist with certain modern phobias, unsure of anything. A friend of mine describes my work as “dirty enough to spit on the pop but clean enough to sanitize the punk” but in the end, I don’t know nothing.

What about your background shaped who you are today, and who are your favorite artists?

Keith Haring, Moebius, Carpenter, Junji Itō, Jodorowsky, Coffin Joe, Vonnegut, Jon Rafman, and all the weirdest cinema and music researched in my whole life make this creature that I am.

What triggers your creativity, and what themes fascinate you the most lately?

I never managed to be very brief but I’ll try: the comedy of life and its horrors, and all the topics we consume I believe.

Movies, life scenarios, music, references, drugs, work, technology, sexual and political behavior, a tile out of place, my problems… I don’t know, sometimes I think we are inmates of a large sanatorium, and out of necessity we produce our own shit, while someone else scrolls Instagram’s profiles thinking “look how he expresses himself, he’s so fuckin’ crazy”.

How do you usually work?

It depends a lot, I often spend lots of time chewing on the topic I need to work on, and it usually takes time for the final idea to come up. Other times I just regurgitate it all at once.

I spent these last years always working manually with paper, paint, and pencils but due a lack of time and several customers asking for modifications, I started to work digitally.

Despite the fact that you keep a low profile, you have found a way to fully sustain yourself with your art.

In a world where social media has definitely changed the way people look at and interact with art, how did you adapt to using it? What do you think are the pros and cons of social media when it comes to art?

I don’t know if I’m the best example of an artist who has adapted to social media but it certainly helped me a lot.

Posting my work on Instagram has made it possible for me to work with my stuff, and being able to reach people wherever they are, I’ve never dealt well with auto-promotion so maybe I’m just lucky if people are interested in my work.

The pros and cons is certainly “the MORE”.

Like MORE information and references but also MORE shitty contents with hate speech, MORE people producing their own stuff but also MORE psychic illnesses due to disappointments based on algorithms and/or hyper exposure, MORE connection but also MORE failed communication, MORE aesthetic and verbal evolution but also MORE disposal of art contents, MORE chances of being astonished but also MORE companies exploiting your work, MORE political activism but also MORE misunderstandings and censorship… So human behavior applied to the internet?

How’s your quarantine going so far, and what’s the situation in your country?

The Brazilian situation is quite catastrophic, and on the edge of collapse (I’m very dramatic isn’t it?).

But think about it, we are on the edge of the collapse of deaths by COVID-19 and the Brazilian government treats this moment like a joke, behaving like an extremely selfish and spoiled child who doesn’t give a fuck about the reality that most of the population is facing, and stupidly encourages people to leave their homes to go to work and consume. It’s very sad and revolting.

I’m lucky to be privileged, my problems are more about freaking out due the isolation or lacking something at home that isn’t so necessary, but with the huge social inequality that exists in Brazil, those who never had these privileges are the ones who are suffering the most at that moment, and everybody knows the crisis is getting worse.

What’s the first thing you’d like to do when this is all over and you’re free to move around again?

Definitely being able to see my family, my dog, and my friends. I do also miss graffiti, which is something I haven’t done in a long time.

Have you ever got in trouble because of graffiti?

I had my first experiences with graffiti at school but I had no idea of what I was doing, then I started doing more serious work in 2015.

I haven’t really got in trouble with it but I had some problems with political stickers and posters.

Since Livetrigger is all about music, and you’re a musician yourself, can you tell us a bit more about your music and the bands you play in?

At the moment, the existing bands (which are on pause due to all this end of the world) that I’m playing in are NOID, a project closer to the noisy sound I used to listen to as a teenager but with references acquired over time, and CRIZIN DA Z.O. a project headed by Fora de Compasso and Dindo that I could describe as futuristic Funk that sounds like modern Carioca’s slang mixed with Noisy Punk, Drum’n’Bass and Industrial influences… It’s very hard to describe it!

What’s the funniest experience you’ve had during a gig or tour?

These two bands are kinda new so I guess that’s why I have almost no bizarre adventures to tell, but I had some fun experiences with other bands.

The best one was my last night in Hamburg.

This was the recipe: a lil’ bit of drugs, lots of parties, a lil’ bit of paranoia due xenophobic people and the suspect of terrorism, and eventually a flight to Portugal under the effects of substances which was quite tense.

The last one I became obsessed with is called Tantão e os Fita, it’s a very noisy and weird band from Rio.

Tantão was the vocalist from a old No Wave/Punk band called Black Future who now plays and works with other two guys on some dark beats with solid poetry.

My guilty pleasure could be “L’Amours Toujours” by Gigi D’Agostino, I love to torture some of my friends with that shit haha!

Recommend three of your all-time favorite graphic novels to our dear readers stuck at home.

I’d probably go for “Asterios Polyp” by David Mazzucchelli, “Daytripper” by Fábio Moon and Gabriel Bá, and “Incal” by Jodorowsky, drawn by Moebius.

What else do you like to do when you’re not making art or playing with your bands?

If you didn’t have to worry about money, what would you do all day?

The freelance work pays the bills, but it also brings mental and emotional stress, so I think I’d focus more on personal work again, and have time to do more projects with friends.

Maybe how to make a good tuna risotto.

Thank you for being with us, Fiedler!

We wish you all the best for the future.