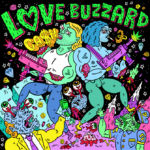 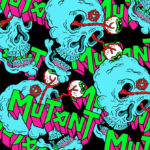 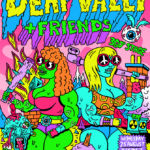 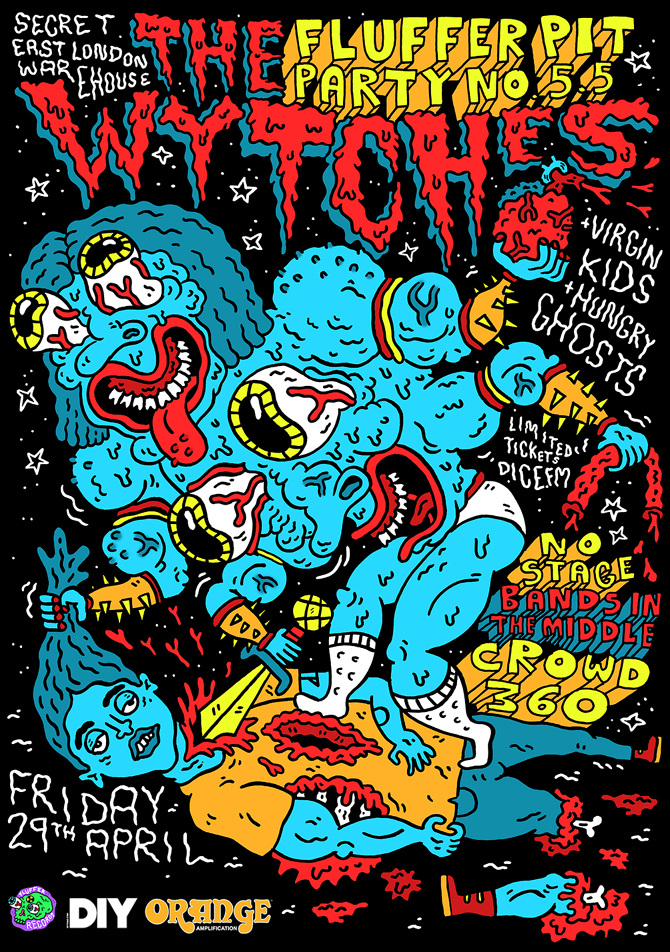 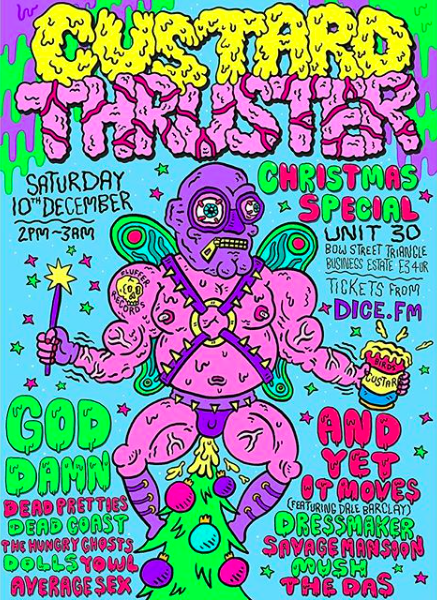 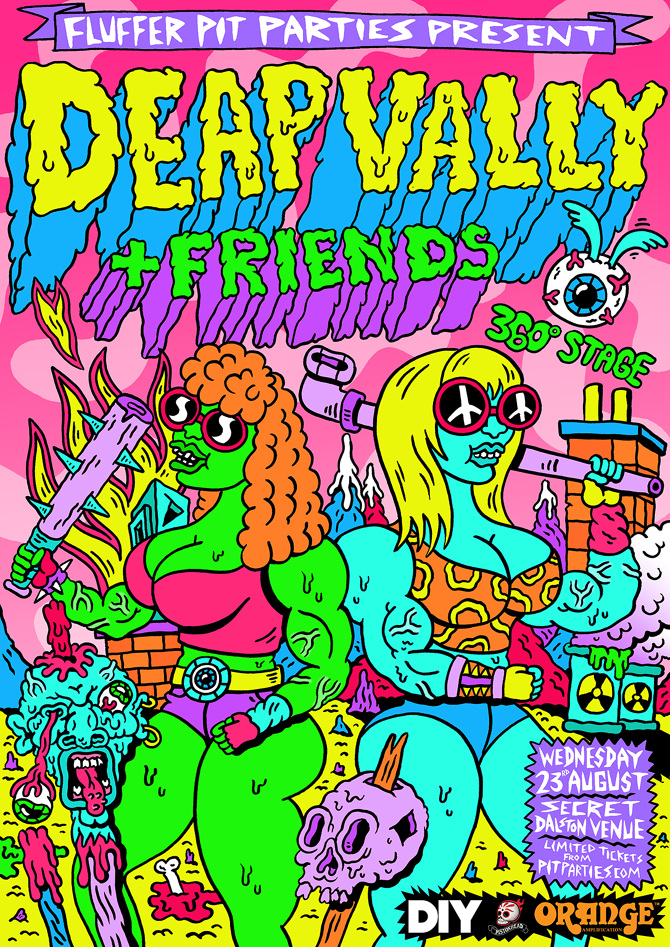 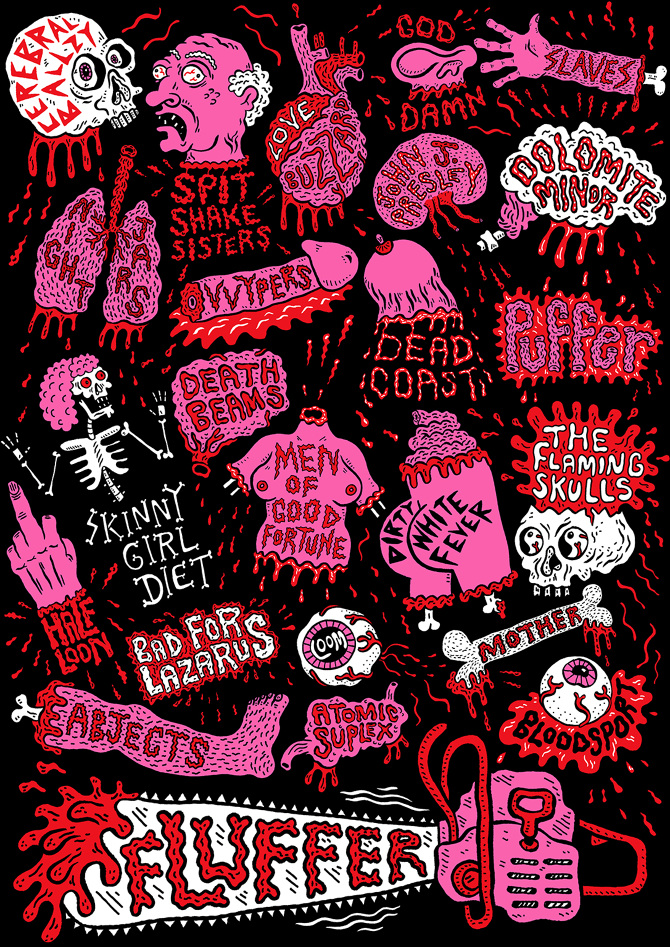 With his unmistakable style the British artist born in 1981, created posters for such bands as Metz, Black Lips, Deap Vally, The Coathangers, The Wytches, Primal Scream, Love Buzzard, Total Chaos, and Sham 69, just to name a few…

Let’s have a chat with this talented mate!

Hi Russell and welcome on board!  I’m really glad to start this second chapter of Visual Satiation in your company.

Let’s start by introducing yourself:

Who’s Russell Taysom, and how did he end up being Fluffer Records chief illustrator?

Hey, thank you so much for having me.

I’m an illustrator and poster artist and I’ve done for people including NME, Complex Magazine, Reebok and I do a monthly comic for Dork Magazine.

I also co-edit and publish a zine called Flabby Dagger.

I met Al from Fluffer at the Old Blue in London. His old band Love Buzzard were playing and I’d done the poster.

I got chatting to Al and started doing artwork for Love Buzzard then from that went on to do Fluffer stuff and from there it kinda grew from them doing shows in basements to this year where they were doing SXSW parties with Metz and The Wedding Present.

I grew up in the country and was obsessed with cartoons and animation so that was the biggest influence on me.

Later I got into rock magazines and comics and then later still got into local bands and making and swapping punk zines.

These things were all such an influence on me as well as 60’s comix artists like Robert Crumb and Spain Rodriguez.

You must have seen lots of bands playing. Which ones did you enjoy the most and why?

My favourite bands have always been local bands that tend to just split up and go nowhere but you can’t beat a small band where half the crowd are their friends.

Out of bigger bands I’ve seen the best were Consumer Electronics, The Cramps who I was lucky enough to see before Lux died, Queen Adreena who I saw a bunch of times including the night I saw The Cramps, Liars who I got to see before “They Threw Us All in a Trench” and “Stuck a Monument on Top” came out and The Fat White Family.

Out of all the works you have done, which are the ones that hang in your bedroom?

I only have one of my pictures on the wall and it’s the poster for the last Fluffer Pit Party and that’s because Prints of Thieves did such a good job of screen printing and I’m a huge fan of screen printing. I have lots of art up by other artists though including Frank Kozik, Ben Rider, Sam Baldwin, Buffmonster, David Shand and Pippa Toole.

I also have a bunch of old gig posters and some wrestling prints up.

It’s just me making fun of my friends and their art.

A few people from outside took offence but I think they didn’t realise that this is the art that I make and that I make a zine where we publish these guys work.

If you had a time machine when and where would you go?

Does it go through space as well as time? I’d definitely go back to the 70’s to see The Pistols, The Buzzcocks and X-Ray Spex play when they were young.
If I can travel through space too I’d like to hang out in ancient Greece but I’m not too sure I’d wanna be stuck in England in the same time period.

What movies traumatized you the most when you were a kid?

Lastly, let’s give you just a few minutes to draw a caricature of yourself and see how it goes! Ready? Go!

Thank you very much Russell!

We wish you all the best.