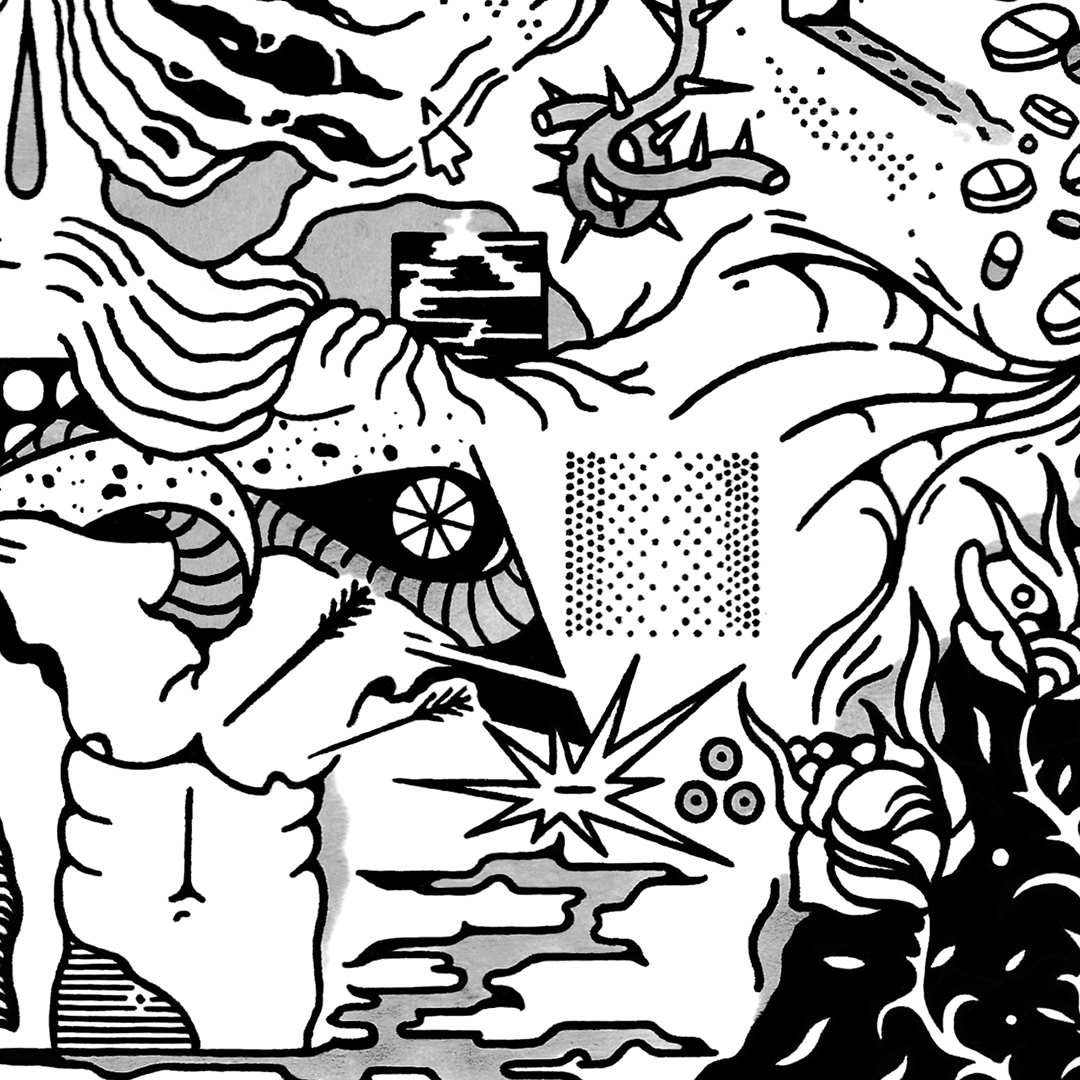 His works are a black and white trip through distorted visions composed by occult images and stunning hypnotic patterns.

His obsession with words and letterings lends homage to the fact that Tom is also a writer and a self-taught tattooer.

Let’s start with an introduction. Would you like to tell us a bit more about you?

Hi! I’m a degenerate artist, national traitor and antisocial networker, currently spending my self-imposed exile in Berlin for as long as I can.

My primary creative neurosis is drawing, although I also enjoy painting, collaging, writing and trolling (both in IRL and on the WWW).

What’s the background that feeds your imagination?

I was privileged enough to grow up in a house full of books, which not only instilled an obsessive reading tendency in me but also germinated my taste for bizarre, macabre and grotesque imagery.

From a young age I would engross myself in medieval woodcuts, Hieronymus Bosch paintings, the devils of Michelangelo’s The Last Judgement; depictions of hell and fantasy worlds held great appeal to me.

I was a strange child, meditating in the playground and drawing occult symbolism on my bookcases with felt tips.

By the time I was a teenager, I had started writing tags around my middle class neighbourhood like any self-respecting little shit

Brighton had a good scene back then and walking to school every day I would see burners from style masters such as NEMA, PETRO and NYLON.

Graffiti influenced and continues to influence me in multiple ways: the aesthetic, the attitude, the adventure. It is perfect stupidity; bold, reckless and joyful.

In my twenties, I developed a strong interest in philosophy and radical politics, as well as modernism and the 20th century avant-garde movements.

Dada’s nihilism, the aggression of Futurism, Surrealism’s rigorous experimentation, the Situationist International and the events of May 68, Fluxus, King Mob, Up Against The Wall Motherfucker – all that energy, revolt and disgust sat well with my punk sensibilities.

How do you usually work?

I am forever drawing half ideas and fragments, writing down words and phrases, plagiarising bits and pieces – the struggle is consolidating them into final works.

I keep lots of sketchbooks and notebooks.

I tend to stick half-finished things on a board so I can think about where I’m going with them.

For me, the creative process is just as important as the product.

If I feel blocked in one direction, I’ll try a different medium or go back to something old.

I try and maintain an artistic mindset in everything I do and experiment as much as possible.

Walking back home from work, I’ll rip interesting patterns and textures off of billposters for collages or take photos of things I can utilise.

Recently I’ve been fucking about and distorting drawings by moving them around whilst they’re scanning.

What themes do you find yourself returning to in your art?

I don’t really enjoy having to explain my work.

I hate the overuse of the term “surreal” so I’ll forgo it here.

As we mentioned earlier, you also come from a graffiti background. Can you tell us a bit more about that?

I’d feel somewhat deceptive presenting myself as coming from a graffiti background as I never really threw myself into the writer lifestyle.

It’s simply a hobby that has given me plenty of hilarious and interesting stories, and allowed me to meet tons of eccentrics, idiots and adults that never grew up.

It is also a useful tool for navigating cities that you’ve never been to, entertaining yourself on train journeys, fucking up all your clothes, and exploring police holding cells in foreign countries.

I get bored when it takes itself too seriously and I despise the conservative and puritanical streak that lots of writers seem to hold (“you can’t do that”, “that’s not graffiti”, “wah wah wah”).

For me it will always be about tagging: the various mediums in which a tag can be applied, its flow, structure, messiness, the spontaneous quality to it, its condemnation by the general public as “mindless”.

Have you had any trouble with authorities while practising your art?

I got fined a lot and briefly jailed when I was 19. I was an idiot and my room was full of evidence.

Some handwriting expert wrote a 15 page dossier about my handstyle which makes for a riveting read. I’m keeping it in the off-chance I have grandkids.

Street Art and its events seem to be just about everywhere these days. Speaking as someone living in Berlin (AKA the hottest spot in Europe for Street Art) what is your opinion about this sort of “Renaissance”? And back to the graffiti side of things, are there differences between Brighton’s and Berlin’s graffiti scene?

90% of what is categorised as Street Art is formulaic and unimaginative, perfect for signifying the completion of the gentrification process in bourgeoisified neighbourhoods and providing backgrounds for a tourist’s selfies.

I can’t really comment on Brighton’s graffiti scene as I haven’t lived there for many years.

London has had a train writing renaissance recently which has been great to see but to be honest I’m not really concerned with scenes or what’s going on back in the UK.

In my opinion the scene in Berlin has a level of innovation rarely seen in other places.

It’s an invigorating city to live in and seeing fresh graffiti every other day warms my cockles.

I’ve seen your tattoo work, and it’s great! Would you like to tell us a bit more about that too?

I started doing very unhygienic stick and pokes at parties when I was in my early 20s with sewing needles tied to a pencil.

A few years later I started drawing flash and practising handpokes on myself and some close friends.

I just recently picked up a machine and started thinking about it a bit more seriously, tattooing my legs and getting a feel for it. It’s early stages at the moment – I’m currently developing a portfolio and thinking a lot about how to bend the traditional formula whilst still maintaining solid structure and contrast.

I like to use a lot of black in my drawings so I’m not so into all the ignorant stuff that’s trendy at the moment.

We know you are also an avid reader, what are you reading at the moment, and who are your favourite authors?

The two philosophers that have had the biggest influence on my way of thinking are undoubtedly Friedrich Nietzsche and Max Stirner.

What music are you obsessed with at the moment?

In the last month I’ve been listening to lots of rap and grime like Gzuz, Slowthai, Ghetts, Lee Scott, Conway the Machine, Westside Gunn and post-punk bands like Institute and Exit Group.

In your opinion, what British word do Americans wish they had?

I’ve never heard an American say “knobhead” and I never want to.

What’s your favourite place in Berlin?

Görlitzer Park at the height of summer.

Lastly, let’s give you a few minutes to draw a caricature of yourself and see how it goes! Ready? Go!

Cheers mate! We wish you all the best!