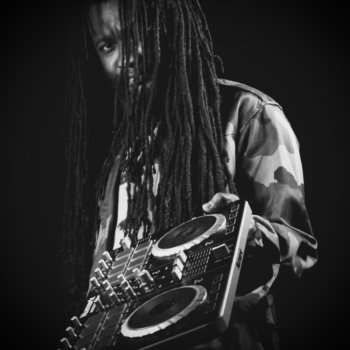 Jahta Dreadluv (RKY) was born in Accra-Ghana, Africa during the late 1970s. His musical and entertainment journey started late 80s when he got access to the instruments of his uncles who then played in a band in Accra, and also engineered the sound.

In the late 90s, Jahta Dreadluv began to work with one of the big fashion and event company in Accra as a designer’s assistant and became part of the event-planning team for a year. He then moved on to set up his first company in metal works, events, wedding planning, decoration and much more , worked with nightclubs in Accra in the early 2000 as event promoter and also in the marketing team. He worked with GTP, Guinness GH, Coca Cola, private individuals, and many others.

In mid-2000, Jahta Dreadluv(RKY) married and then moved with his family to Haiti in the Caribbean. Working hard to attain his dreams and goals, he set up companies and worked with Vivario and many others until the earthquake of Jan. 12, 2010, forced him to close down his studio and shop in Port-au-Prince, Haiti’s capital and largest city.

Thanks to the collaboration of Jahta Dreadluv Media and the Church of Haile Selassie with the support of Fokal, Fastforward, NETINC, Kob Mich ‘n’ Co, Haiti, S.A, Tripp TV, and Tele Star, Jahta Dreadluv(RKY) with assistance of Pablo Gilbert was able to stage a big event for HIM Earthday https://www.youtube.com/watch?v=1ehqPbnBvhc in Port-au-Prince on July 22, 2011 at Cafe des Art.

Jahta Dreadluv(RKY) decide to continue and master his skills and went to METFILM SCHOOL in EALING STUDIOS London, UK to study Documentary Filmmaking in 2012 and he did his first ever documentary film on ‘Primitive Jason Barnes’ called Spiritual Journey in 2012 shot in London, UK http://rky.jahtaeworld.com.

Jahta Dreadluv(RKY) life change again in 2013 by changing country from Haiti to Switzerland and he continued with his mission in the music and entertainment business. He set up his multimedia company in 2015 called RKY and did some events in Geneva with different artistes and production companies and also in other parts of Switzerland and also in France.

And not to forget Jahta Dreadluv played in the Swiss Reggae Festival 2016 with General Sandoz, Charles Saint’s and Primitive in Biel Bienne, Switzerland https://www.youtube.com/watch?v=oKWJv9sf0CM as the stage Selector for the artiste and also entertain the audience.

Again life came with another change for Jahta Dreadluv(RKY) to move country again. He move from Switzerland to Costa Rica in early 2018 with his family and after three months, in April he setup an online radio called JAHTA RADIO LIVE http://jahtaradio.jahtaeworld.com  powered by RKY JAHTA MEDIA and he works as manager and programmer at the radio and also broadcast live streaming from live events and the radio is 24/7 online radio broadcasting service. For more info on the radio please visit http://jahtaradio.jahtaeworld.com.

Jahta Dreadluv(RKY) is a member of PPL and IFPI (ISRC); this means that the works of Jahta’s talents and his productions are protected by PPL and IPFL.

Jahta Dreadluv is one of the great Reggae, Dub producers, Afrobeat, experimental ryddim producer music Dj selector, event consultant and LiveSet performer around the world. You can check some of his works on http://ryddims.jahtaeworld.com/.

Jahta Dreadluv release the long awaiting album TROTRO RYDDIM ALBUM on 25th January 2019 with talents from all around.

Jahta Dreadluv tour Europe in March 2019 with his latest album TROTRO RYDDIM ALBUM and with his LiveSet performance in cities like Genova-Italy with Groove Yard Sound and Valencia-Spain with Cultural Roots Foundation.