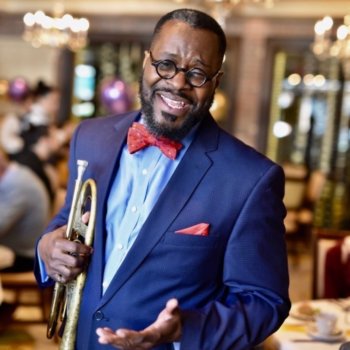 Vincent Gross is best known for his musical multiplicity as a vocalist, instrumentalist, and showman. His Avant-Garde jazz vocalese, crooning, and scatting styles combined with incisive improvisational techniques on the trumpet, cornet, and flugelhorn allows audiences a fully immersive and engaging experience as an all-around performer.

Gross was born with a natural-born musical talent amid a family of Gospel musicians. He began playing the tenor saxophone and switched to playing trumpet alongside his father who played the alto saxophone, his mother who played the drums and harmonica, and six siblings who played a myriad of instruments at the church where his father pastored in Baltimore, MD. He was inspired to learn to play the trumpet after seeing Louis Armstrong on television. Armstrong's performance resonated with him so strongly that he switched to playing the trumpet when he was ten years old.

Gross's education centered around music. His' natural-born talents enabled him to attend the music and arts-focused Frederick Douglas High School where he was recruited to perform with notable jazz musicians at popular Baltimore-area clubs. He furthered his music studies earning a Jazz Studies certificate from the Johns Hopkins University Peabody Conservatory. At St. Augustine University he was the principal trumpet player in the North Carolina Youth Symphony Orchestra and where he became a member of the Alpha Phi Alpha fraternity.

Gross toured in Japan with the Mark Conese Quintet, Chuck Brown, Japan Jazz Festival (1986), New Orleans Jazz & Heritage Festival (2000), Down Beat Jazz Festival (2004), and countless others. He also led bands and performed in exclusive restaurants, festivals, and private events across the north and east coast. During this time Gross also spent more than two decades as a corporate professional in the automotive industry. After suffering a major injury from a dental procedure, he took a decade-long hiatus from performing on the music scene and continued to rise as a Business Finance Manager and General Manager.

After relocating to Houston, TX, in 2018, Gross's mother encouraged him to return to his God-given gift of singing and playing the trumpet. He rapidly rose on the music scene leading bands, performing, composing, producing, and teaching trumpet techniques privately. Gross is regarded as one of the most entertaining vocalists in Houston. With this much success in a short period of time, one can only guess what's next for this artist.

Vincent Gross and his band are available to perform for any event that needs a great band in the Houston, TX area, within the U.S., or around the world!

Vincent Gross has performed, recorded, and appeared with many local, national and international artists. He appears on Grammy® Award-winning and nominated projects, "Yardbird's Suite" and "Cornelia Blue" on Mark Gross ’Preach Daddy’ (King Records; 1997). He wrote lyrics to "Brenda Mae", and co-wrote lyrics to “While I Was Sitting In My Room” and "The Gospel According to Mark" on Mark Gross '+ Strings’ (MGQ Records; 2018).

Gross introduced his first digital release in February 2020, My Funny Valentine. The single features sultry romantic vocals of Vincent Gross, legendary keyboardist, platinum-selling artist, Emmy® Award nominee Bobby Lyle, and violin Dominique Hammons. This release rapidly gained attention that it was played on the radio in the DC/MD/VA and TX markets in less than 24 hours!

Gross created commercial jingles and locally distributed a collection of unreleased material early in his music career. His latest projects include "What A Wonderful World" and the "2019 Holiday Collection", which he engineered and produced in 2019 with one of his trio bands, The Vincent Gross Trio.

Gross is a member of the American Society of Composers, Authors & Publishers (ASCAP) and Broadcast Music Inc. (BMI) Performing Rights Organizations. And he is a long-standing member of the Alpha Phi Alpha fraternity.