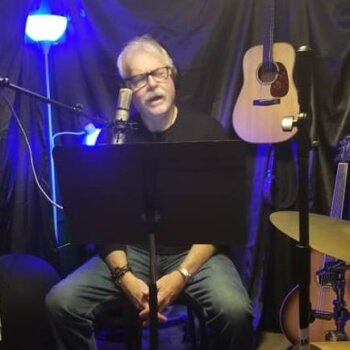 WB and The Geezers

Hailing from the gulf coast of Northwest Florida’s Redneck Riviera, WB and The Geezers, is a well-established band

with a penchant for writing infectious music and relatable lyric’s. Made up of Will and Bill, they are always looking to

break the boundaries of possibilities within music. They have continuously put out world class material gaining

them many life-long fans along the way. Many of the popular tunes created by W.B and The Geezers were

perfected during the band’s performances and stints at countless songwriter festivals, open mics and bar rooms.

Both individuals in the band started their journey in music separately, but came together to form a strong bond in

WB and The Geezers due to their undying passion for country music. William’s words and music combined with

Bill’s attention grabbing arrangement’s, present a fresh new perspective with their unique brand of music. They

consistently blend the foundations of Country, Gospel, Folk and Blue Grass music into a style that reaches out to a

abundance of listener’s hungry for red dirt plain spoken music with a twang. This resourceful duo has a unique

Will was born to a Ship’s Captain in Houston, Texas and has been travelling the world since a tender age. He joined

world. Years of book’s and binders filled with the fertile seeds of lyrics are safely stowed in Will’s home as he uses

them to weave the song’s that he shares with the world. On the other hand, apart from being a musician, Bill started

sailing instructor. Music is not something that can be easily abandoned by extremely passionate individuals like

Bill.  It took Bill a little detour but he eventually found his way back into music as a sound engineer before meeting

Will, in 2012 A fateful meeting of local guitar players brought about the dynamic duo of Will and Bill and a merry

band of sexy senior citizens known as The Geezers. For most people, music is something you do for fun, especially

when you are at a certain age, but not for Will and Bill. Despite having lived for a few decades, Will and Bill never

thought of age as a hindrance but more of a wealth of experience they are able to utilize. The band continued to

evolved with every song, every gig and every recording, ultimately becoming the world class performers they are

features/interviews on notable music blogs, radio networks and websites not just within the country, but all across

locally, regionally as well as live streaming and is looking forward to showcase their music at many more venues

globally in the near future. As they say, ”Invite us to your party and we will give your guest’s something to

Armed with big dreams and plenty of energy to spare, W.B and The Geezers are ready to engage the world as they

prepare for a Bucket list tour of The UK and Europe for the summer of 2021 and the spring of Australia. They hope

to influence the world and connect with fans and lovers of old school country music and help them to, “Embrace UR

Geezerdom” through their music. W.B and The Geezers is no doubt, well on their way to becoming a phenomenon to

this generation of country music lovers.

“The Redneck Riviera Review” is heading East. Will Lake of WB and The Geezers And…
More info
June
01
2021

“The Redneck Riviera Review” is heading East. Will Lake of WB and The Geezers And…
More info

We are looking for Promoters and Booking Agents for a 2021 summer tour of medium…
More info
We use cookies!