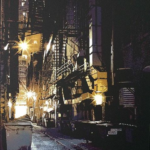 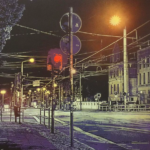 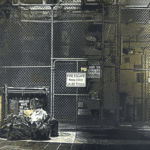 I never knew looking at a stencil artist’s work could send you into a perpetual loop of disbelief, but German artist René Meyer has somehow managed to raise the bar of this art form with his hyperrealistic stencils… Let’s have a chat with him!

Let’s start by introducing yourself: who’s René Meyer and what’s his relationship with OCD?

At first I thought the OCD thing was meant seriously.

Well, I don’t suffer of OCD or some kind of autism.

I am a normal dude just with a lot of passion for what I am doing.

I am into stencil art since 2005, at that time I found a website called “stencilrevolution”. It only took a day after visiting the site and I tried my first multi-layer stencil.

Would you like to tell us a bit about your background?

Already in my childhood, I drew a lot. Mostly I had a reference image of a car or something like that and tried to redraw it.

My dad worked as a construction worker, he always was that kind of guy who fixed up everything by his own. Every time he built or repaired something I was watching him and asked if I could help him.

To create something with your own hands gives you that amazing feeling, I always loved that.

As a teenager, I started skateboarding with friends from school. I still skate but not so often like back in the days. Skateboarding was a great inspiration and helped me to push my own boundaries.

Drawing, skateboarding and the love for craftsmanship held a huge part of my personality.

After finishing school in 2004 I started a training as a graphic designer with a focus on multimedia.

When a friend opened his skate shop in my hometown I helped him with designs for shirts, boards or organized contests and I did the whole visual identity stuff.

At that time I only did stencils irregular but already some really complex one.

Only a few of my friends knew that I was doing stencils.

Some of them asked me if I could do some portraits of there girlfriend or family.

Especially right before Christmas, I had a lot of commission works. But I never was in that portrait subject or humans in general.

I was fascinated by urban landscapes, factories or other architectural subjects. I am always looking for challenging myself with that technique and what can be done with it.

So I decided to never do any commission that I’m not into or isn’t a challenge — especially portraits.

In 2010 I moved to Berlin for my communication design studies. As a student, I had much more time to cut stencils besides my studies.

Since 2013 I decided to work under the pseudonym RMYR and in 2014 I started to publish my stencils on Instagram as a personal diary.

Most of my stencil works get dusty in bubble wrap, cause I did them for myself. In the last two years I sold maybe 3 or 4 of them.

What’s the process behind your art? How do you usually work?

When I first started with stencil art I used images from the internet or photos from friends but nowadays I take the photos by myself.

After choosing the right image for a new stencil I adjust lighting, contrast etc. in photoshop, also the separation of the layers.

That process takes maybe about an hour.

My stencils are mostly not larger than 80 x 60 cm, cause of my small apartment and the available workspace.

I print all my stuff at a copy shop and mount a foil called mylar over the prints and start cutting with an art knife — all by hand of course!

I tried a lot of different knives, blades and also a so called stencil burner but in the end, the OLFA knives and blades work best for me.

How long does it take you to finish a piece, and what’s the longest you’ve ever worked on one?

It depends on the amount of layers and how tiny the details are.

I have a regular 9 to 5 job as UX-/UI-Designer and Web-Developer, so I have to cut everything after the end of work.

The longest I have worked on was one of my Backyard Alley’s with seven layers and a lot of bricks. Must be up to 150 hours of work or so.

As someone who comes from Europe’s epicentre of Street Art and must see every type of work under the German sun how does it make you feel, and what’s your opinion about that? Is it something to aspire to, or is there an expiration date of this “Renaissance”?

To be honest, I never really thought about that.

I mean it’s nice that more and more murals from great artists from all over the world can be seen in every bigger city.

Berlin feels like an epicentre to all of that and it’s crazy what can be done with paint rollers, brushes and spray paint in that scale.

In my opinion, every town should have some murals — it makes a place way friendlier.

I don’t think there is an expiration date, it’s the subject that matters.

Who are your favourite locals of the “German Graffiti Scene”, and which other artists would you recommend?

I like the work of Christian Rothenhagen AKA deerBLN, the awesome tile stencils and illustrations of ADD FUEL, the works of Mariusz Waras AKA M-City, the unbelievable also original stencil works of the Monstfur guys, OG stencil master Czarnobyl, followed by pisa73, Stefan Winterle AKA Leckomio, E.L.K., EVOL, Logan Hicks of course, and many many other known or unknown artists…

What are you working on at the moment, and what do you do besides creating cool artworks?

All about 50 mq of stencils that needed to be done.

I’m also trying to push my stencil style a bit further in a more abstract way.

I am fascinated by the Graffuturism movement that inspires me a lot. Besides that, I am doing my regular job from 9 am to 5 pm.

What music would I hear if I were in your studio while you’re working?

Sorry but… I don’t like beer or alcoholic drinks in general.

Just not my kind of flavour.

How the heck is it possible that you only have 673 followers, it’s not like your Instagram profile is hard to find!

I don’t know, but it’s okay. It’s not that I wouldn’t really appreciate having more followers *laugh*…

Thanks a lot for having been with us René and all the best!